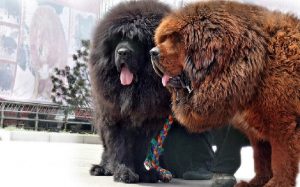 Tibetan Mastiff is a large-sized, giant dog that was used as guard dogs for livestock and properties. It is a tall dog with a heavy coat and a bushy tail which curves over the back.

The head of this breed is broad with deeply set eyes and highly set, pendant ears. This dog’s look is also compared to the bear or lion-like many other large dogs due to its mane around the neck. It is a strong and muscular working dog.

The Tibetan Mastiff is not suitable for apartment life due to its large size and also due to its high activity level. They do well in a house with a yard where they can do their desired activity. It is a very active dog and is not suited for a novice or an inexperienced dog owner. Any owner who understand its behavior is suited for Tibetan Mastiff.

The origin of the Tibetan Mastiff is still not traced but it is a very ancient breed of Tibet. It was a mighty guardian of the Himalayas and it is believed that it is the ancestor of all the present mastiffs.

It was brought to Europe in the mid-1800s and to the United State in 1970s. After the conclusion of World War II, Dalai Lama gave two Tibetan Mastiff as a gift to President Eisenhower. In the 1960s and 1970s, several more were imported from India and Nepal.

The American Kennel Club recognized Tibetan Mastiff in 2006 in a working group. In 1974, the American Tibetan Mastiff Association was founded. Today this breed is kept as a family companion and it still has its guarding instincts and protects its family.

Tibetan Mastiff is a child-friendly dog that is loving and tolerant of kids. However, due to their large size, it is not recommended in a house with small children and toddlers. They might accidentally knock on kids and injure them.

Older children do great with Tibetan Mastiff. It is necessary to teach your kids to behave around dogs. Small children should be supervised while letting them interact with your Tibetan Mastiff dog.

Temperament: The Tibetan Mastiff has an independent and protective temperament. They are highly protective of their people and do not accept any threats upon their people. They love their family and wants to spend most of the time with them. It will not let a single unfamiliar people inside the property without its master permission. Therefore they make an excellent guard dog.

Behavior: Tibetan Mastiff shows aggressive behavior around other dogs and most importantly around the same sex dogs. If a dog pet is to be kept at home with Tibetan Mastiff, they both should be raised together from an early age, so that it gets along with another pet dog well.

As they are very close to their people, if left alone for a long time, they can face separation anxiety. Therefore, someone should accompany Tibetan Mastiff and should not be left alone on their own for a long time.

Personality: Tibetan Mastiff has a reserved personality and is aloof and suspicious of strangers. They do not trust strangers easily and will bark at them warning their master of their approach. It is said that once a Tibetan Mastiff is fully grown, it alone is enough to guard the entire village. They are lively at young and serious and mellow when adult.

Training Tibetan Mastiff is not an easy task to do as they are independent and are of dominant nature. To train them, you should establish dominance and firm leadership upon it. They should be treated with kindness and gentleness, as harsh and force hand makes them aggressive that can lead to biting.

Use positive methods of training by rewarding them with delicious treats and a lot of vocal praises as a source of motivation and encouragement.

The average life span of the Tibetan Mastiff is between 10-12 years. During these years they might suffer from the following possible canine diseases:

The Tibetan Mastiff comes in the following colors and marking according to American Kennel Club:

Cost: The average cost of the Tibetan Mastiff is between $2500-$3500 USD that varies according to the quality of the breeders. However, adoption costs a lot less which is around $300. The expenses are only of taking care of the puppy before adoption.