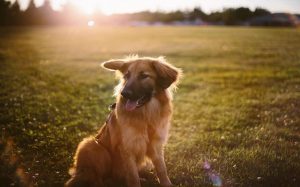 The Chinook dog breed is a rare breed of American sled dogs that originated in the early 20th Century in New Hampshire. These dogs have stouthearted dignity, with a kindly twinkle in their dark, almond eyes.

The Chinooks are calm, socializing dogs with a special feel for children. Here is everything you need to know about the breed.

Origin & History of the Chinooks

The Chinook began its journey of evolution in New Hampshire when an explorer as well as author named Arthur T. Walden set out to create a breed of sled dog with tremendous amount of power, agility and speed.

Arthur bred a mastiff-type dog with a northern husky. As a result, three tawny colored puppies were born which were then called Rikki, Tikki and Tavi were born.

Rikki had all the qualities that Author/Explorer had wanted, and he was given the name “Chinook” after a treasured lead dog he had left behind in Alaska.

Chinook was an intelligent, large, and an excellent lead dog for Walden and his team of sled dogs. Chinook was later bred to German and Belgian shepherd working dogs, which resulted in the breed known today as Chinook.

Yes, they are good when it comes to being child-friendly. They are friendly and non-aggressive breed that has a very shy nature.

The Chinook is a very shy breed of dogs that are very gentle with other canines and children. They behave very kindly and affectionate with anyone they love to please.

The Chinook breed has a gentle and even temperament which makes it easier to rear compared to other sled dog breeds. These calm and patient dogs get very playful along with children and other dogs.

Being an outstanding athlete, the Chinook is a very intelligent, hardy and loyal breed. They are suited to be in pack’ environment. Their intelligence makes it easier for the owner/trainer to train them.

Trainability of the Chinook

The intelligence of the Chinook breed comes to be very useful while training him. He is smart, versatile and highly trainable breed. However, they are strong-willed and can become a bit stubborn.

Almost every Chinook dog requires correction in order to avoid its dominant position in the family. He requires an owner with firm but gentle hands to prevent aggression and stubbornness.

Good training sessions will give him the opportunity to spend some of its energy and its brainpower for learning new things.

Despite being very clever dogs, Chinooks are likely to resist authority on their own favor. Not only it takes five or six weeks, but also the training should be continued each and every day of the dog’s life.

Facts about the Chinooks

Here are some of the facts about the Chinook dog breed that you might want to know:

Some Common Health Issues of the Chinook Dog Breed

Hip Dysplasia is a serious hereditary disease seen in dogs which is caused due to the malformation of the hip joint.

Epilepsy is a very chronic disorder that causes unprovoked, recurrent seizures in the dog’s brain.

The Chinook dogs are found in six different colors. They are as follows:

Make your to have your house and accessories very well puppy-proofed if you are planning to own one. Electric cables and wires should be properly managed and kept out of reach of the puppy.

Despite being intelligent, the puppies take a lot of time to catch up with the training you give them. So, be gentle and do it with positive reinforcements.

Cost of the Chinook puppies

If you are willing to buy a Chinook puppy, you’ll have to pay $800 to $1000 approximately depending on the purity of the breed.

Here are some dog breeds that are very similar to the Chinook dog breed:

Visit Doglime for more Dog breeds Information and their behavior.