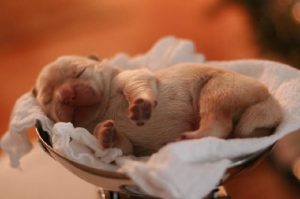 Chow Chow is one of the most popular breeds today. With its bear-like appearance, a puppy Chow looks like a walking teddy bear. Chow puppies are naturally well-behaved than most of the other puppies. A female Chow Chow can give birth to 4-7 puppies at a time.

The Chow Chow is a large dog breed. Therefore, physical development is slow compared to small and medium-sized breeds. The growth stages of the Chow Chow puppy is a very interesting topic. It does not reach maturity until the age of 18-24 months as it is a large breed.

Newly born Chow Chow puppies are completely deaf, blind, toothless, and unable to walk. They are not able to regulate body temperature and even urinate or defecate on their own. The puppies completely rely on their mother for warmness by piling all the litter-mates against her body.

A puppy that is separated from its mother’s warmth can quickly die of hypothermia. If they get cold, they cry out loud calling their mother to make them cozy.

At this stage, the Chow Chow puppies should be given only mother’s milk, as it contains colostrum that is rich in antibodies. The mother’s milk protects the puppies from any kind of disease at an early age. This is the stage where the puppies spend the majority of their time sleeping. They spend almost 90% of the time cozying up against their mother’s body and sleeping. The more they sleep, the more it benefits in their physical development.

The Chow Chow puppies grow up double by the second weeks and their physical changes can be seen. They start to move their body slowly by crawling which provides them with the exercise they need to develop muscles.

The transitional stage is an important stage for any puppy. This is the period when the puppy slowly starts to open their eyes and ears and get familiar with the canine world.

At about 2 weeks, they are able to hear the sound and between 10-16 days, their eyelids begin to open up and they can see. They start to form their own vocabulary by yelping, barking and whining to communicate with their mother and littermates.

By 3 weeks, the puppies’ development advance from neonatal to the transitional stage. They start to play with their littermates, eat food from their mother’s bowl and can potty by themselves. Their teeth slowly began to develop and they can have some soft dog food with their mother.

The Chow Chow puppies enter the socialization period in the fourth week, following the transitional period. In this period, the puppy’s interaction with a human being and other pets increases. They form an attachment at this period that remains with them for the rest of their life.

This is also the most critical period, as the puppy learns to accept any other human being as part of their family. The Chow Chow puppies need proper socialization and training so that they can separate between family and strangers.

Starting from week 4, the mother’s milk production begins to slow down and she will slowly wean her puppies from nursing. The Chow Chow puppies will start having some solid food with their mother by slowly reducing the intake of mother’s milk.

At this time start giving you Chow Chow puppies proper diet and supplements. The first vaccination of Distemper, measles, parainfluenza is to be given at 6-8 weeks.

The Juvenile stage is a period when the puppies are more independent and also more active. They will challenge or ignore you and start becoming more mischievous by chewing on stuff, digging, running here and there.

They will probably make you tired and say ‘no’ or ‘stop’ to a lot of their behavior and activities. However, no matter what, never use harsh words and force hands on them. They are just a puppy so gentle treatment and proper training will make them a well-mannered adult.

The Chow Chow puppy will weigh around 8.6-13.6 kg at the age of 4 months and 18 kg by the age of 6 months. At about 10-24 weeks, DHPP, parainfluenza, and rabies vaccination should be given to them.

At the age of 8-16 months, your Chow Chow puppy becomes an adult. Although they are still a puppy and emotionally immature, they are sexually matured and the testosterone level increases.

They are ready for mating at the age of 12-16 months. At this age, they need to be physically active, so that they remain healthy and the developmental process of their body go right. Slowly change its food from puppy diet to premium adult diet and supplements.

The Chow Chow eating amount, diet changes. The body is fully developed by the age of 16 months and their coat is replaced by the adult coat that is longer and more fine than the puppy coat.