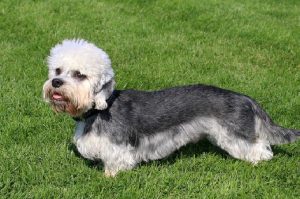 Dandie Dinmont Terrier is a small terrier dog which has a unique appearance, quite different from other terrier dogs. They have a large domed hair that is covered with soft, silky white hair, feathery hanging ears and large eyes that are set low in front of the head.

Although Dandie Dinmonts are small, they are muscular with short and powerful legs. Their teeth are sharp, somewhat like a scissor. They are an intelligent and independent breed that suited for hunting rather than being a lapdog.

Dandie Dinmonts were originated in the 1700s from Cheviot Hills area between England and Scotland. The name this breed got is from a fictional character in the novel Guy Mannering by Sir Walter Scott published in 1814.
They were bred for hunting small game and tracking otter and badger.

The ancestors of Dandie Dinmont is unknown but it is believed that the rough terrier, native of the area is the basis of the breed. They were not only popular among farmers but were also popular among the nobility and even royalty.

Dandie Dinmont is typically child-friendly, as long as they are brought up together. They go along with the children of the same house well but for other children, they should be socialized and expose to them at an early age. Younger children should be taught to approach dogs to avoid any rough playing.

The temperament of Dandie Dinmont terrier is independent, active and proud. They are courageous and do not easily back down when they feel threatened. They do not show quick aggression like most other terrier dogs. Dandie Dinmont is a watchdog and they are suspicious of strangers. They warn their master with a loud bark if they see any strange activity going around.

Dandie Dinmont loves to be with family and mostly form a strong bond with one person of the family. Leaving them for a long period of time can lead to their destructive behavior. They are devoted and loyal to their family and makes a great companion.

They do well with older children but with younger children, you should be careful. If the children by mistake pull their hair or ears or even snatch their food, they may get aggressive and bite. A house with already another same-sex dog is not a good place for a male Dandie Dinmont.

Training a Dandie Dinmont Terrier can be a challenging task to do. They are independent and stubborn and think of themselves as a leader. Therefore, you should prove them wrong and show that you are the leader. Establish firm leadership with confidence and consistency. Include lots of delicious treats with word praises to keep motivating them. The training session should be short and fun.

Dandie Dinmont is a generally healthy breed but is prone to genetic health problems. The average life span of this breed is 11-13 years. The possible health disease that they might suffer are as follows:

Dandie Dinmont has a downy, soft, warm and water-resistant undercoat. The outer coat is crisp which is 2 inches longer. They come in 2 colors that are pepper and mustard.

The average cost of a Dandie Dinmont is $1400- $8100 USD. However, adopting cost much lesser with only the expenses of taking care of the puppy. The average cost for adaptation is $300- $400.

The average height of adult Dandie Dinmont is 8-11 inches. The average weight is between 18-24 lbs.

Visit Doglime for more information about Dog Breeds and their behaviors.