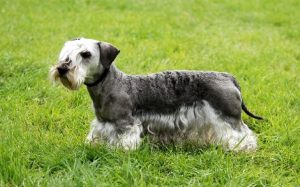 The Cesky Terriers are easy going dogs with even temperament and lively personality. They are suited for homes those who are looking for a lively companion. They are muscular, short-legged, and are great hunters. Ceskies have a fine silky coat with wavy facial hair which gives them a sporty look.

Cesky Terrier dogs require regular exercise and early training so they need enough time from the family members. These breed with a bearded face and long drop ears are adorable dogs.

The Cesky Terrier is originated in 1948 in Czechoslovakia by crossing the Sealyham Terriers and the Scottish Terriers for the purpose of hunting vermin in the forests of Bohemia.

Thanks to the sportsman named, Frantisek Horak, who grew up hunting outside Prague. Horak decided to develop a dog who can go to ground and dispatch rat and could also work in a pack like hounds with a gentle and obedient companion as retrievers. Frantisek Horak crossed Sealyham Terriers and the Scottish Terrier, and as a result, the Cesky Terrier was born.

Cesky Terriers are child-friendly because they are loyal, devoted and playful. They make a great companion for children as long as they have been raised and children have been taught proper boundaries. They love children who can play with them all day long.

The Cesky Terriers have the energy to keep up with children and won’t refuse a play. However, even they are the more laidback of the terriers, their nce should not be tested.

What Kind of Behavior And Personality Does Cesky Have?

The Cesky Terriers are known as the calmest and easy-going among terriers because they are happy more friendly and non-aggressive with every people as well as other pets. However, they are suspicious and shy towards strangers which make them a good choice to watchdogs.

Cesky Terriers are playful, sweet and are extremely loyal to their owners. These little dogs love spending time with their owner and hate being left alone for long periods. They are highly sensitive dogs and will easily get depressed when treated harshly or ignored.

Cesky Terriers develop separation anxiety if left for a long time. Like all terriers, Cesky dogs can be stubborn too. That doesn’t mean they are very dominant and unintelligent. When it comes to stubbornness, you could avoid this behavior with patience and consistent training.

Cesky Terriers are easy to train since they are always eager to please their owners. They will happily follow the commands just to make their masters happy. This sensitive breed will not respond to harsh training so it is better you use positive reinforcement methods with calm on your voice.

If trained properly with consistent leadership, they are perfect dogs with excellent and alert watchdogs as well as a well-mannered house companion.

Some of the facts related to Cesky Terriers are:

This Cesky Terrier breed is not known to have many health problems and is usually considered to be a breed. some are prone to certain health conditions than others. With regular exercise, healthy diet and vet checks, your companion will remain by your side for many years to come.

The main health conditions that the owner should be worried about are:

Cesky terriers are found in the following color:

Cesky Terrier dogs can give birth to 2 to 6 puppies at a time.

The average cost of the Cesky Terrier puppy ranges from $1200 to $2000 USD depending on the breeder.

The male Cesky Terriers have a height of 29 cm similarly, the female will stand up to the height of 27 cm relatively two or three inches smaller than the male ones.

The average weight of the Cesky Terriers is 10-13 pounds.

The dogs breed similar to Cesky Terrier are: