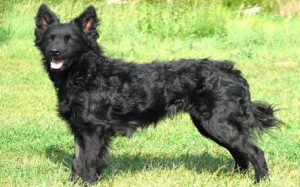 The Croatian Sheepdog is small to a medium-sized dog which is originated from Croatia. It is categorized under herding breed used to herd sheep and cattle. They have a slightly rectangular body shape with curly or wavy hair and a spitz-like face. Their eye shape comes in an oval with brown color. The ears are triangular medium-sized that stands high on the skull.

Croatian Sheepdog have double coat where undercoat is heavy and outer coat is soft and wavy or curly. Their tail is small sized with long fur that goes high up when alert and is mostly docked.

Croatian Sheepdog appearance has not changed much since the 14th century. The written documents about Croatian Sheepdog by veterinarian Prof. Dr. Stjepan Romic from 1374 was found and studied.

Croatian Sheepdog gets along well with children of any age. They are friendly, affectionate and energetic, so makes a great playmate with children. However, children should be supervised and taught how to approach dogs. Younger children might unknowingly pull the hair or tail, which can lead Croatian Sheepdog to bite and become defensive.

Croatian Sheepdog is of loyal, alert, active and athletic temperament. They are very energetic and loves to be engaged in some kind of work. As a herding breed, they have a high instinct of herding which makes them excellent watchdogs.

Croatian Sheepdog is intelligent and should be occupied with works, exercise, and games. With physical exercise, they also equally need mental stimulation, otherwise, they will show destructive behavior. They do well with other dogs if properly socialized and raised with them from an early age. As with strangers, they are little reserved and might bark at them if they find anything suspicious. Proper socialization will help them get along well with people.

Croatian Sheepdog is quite dominant and can be hard to train for a first-time owner. However, with firm leadership and positive training methods, they are very easy to train as they are intelligent and responsive. The owner should be confident and gentle and should know his ways with dogs.

Include fun mind game like hide& seek, fetching and some tricks. This will keep them mentally stimulated and they will remain focused on training. Reward them with treats and a gentle pat on the back after a task is done, which will keep them motivated.

Croatian Sheepdogs are herding breeds and are usually healthy. the only possible health problem it may face is body injuries during running and herding. They are also prone to a few health-related problems and they are:

The average cost of a Croatian Sheepdog puppy is $1000- $1200 USD. If you prefer adopting than it will cost relatively low. The cost only includes vaccination and taking care of the puppy which is usually between $200- $300.

Adoption is a great idea as a homeless, helpless puppy gets a good home to grow up.