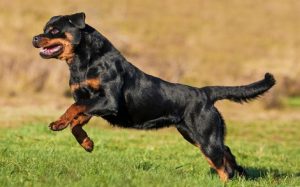 Rottweiler is a medium to large-sized dog breed which is very popular in USA, UK, and Canada. They are strong and powerful dogs that can be dangerous around unfamiliar people.

They are very famous as a family companion and if raised properly and socialized, they are gentle and loving. As a powerful dog, it is not suitable for a novice dog owner who cannot handle it and guide it in the right direction.

Rottweiler has a compact and muscular body which gives it powerful and strong looks. The male has heavier bones than bitches. The head is of medium length and broad between the ears. Their eyes are round with an alert and self-assured expression. The coat is short, dense and straight where the short coat is on head, ears, and legs.

The Rottweiler was originated in Germany and known as one of the most ancient dog breeds. They used to accompany the Romans to herd the cattle through German. They were given the work to drive cattle to the market, pull carts, guard the homestead, and even bring money from the market o the belt around their neck.

When the railroad cattle cars were developed in the 1800s, Rottweiler’s career in livestock ended. After that, they were taken to work at military, property protector and family guardian.

In 1971, the Rottweiler parent club was formed. The American Kennel Club admitted it in the Stud Book in 1931 and the official standard was approved in 1935.

Kids should be watched while they are interacting with Rottweiler, as they have a strong body that might fall and hurt them.

Temperament: The temperament Rottweiler is loyal and loving. As a pet, they are fun, entertaining to be with, who loves to play and make its people laugh. However, they are not so friendly with strangers and can be aggressive around them. Therefore, early socialization with a variety of people is needed to avoid unnecessary aggression.

Behavior: A well-bred Rottweiler is never an aggressive dog. So before buying, its breeding background should be checked. They need vigorous exercise, and if they do not get their required activities, they will show their destructive nature by chewing whatever they can reach. Therefore, they should be engaged in regular exercise that fulfills their activities requirements.

Personality: The Rottweiler has an independent, confident, and courageous personality. They are very protective of their loved ones, which makes them an extremely great watchdogs. They are loving and affectionate to their family and they tend to guard its family properties.

Training Rottweiler is a hard task to do as they are independent and tend to become dominant sometime. They are also stubborn which makes it tough if the master is a novice owner. They need a confident leader who can train them with confidence and consistency.

After giving them a basic obedience training, enroll them in an agility training which will keep them mentally stimulated. As a reward, give them treats and vocal praises that keeps them motivated and encouraged.