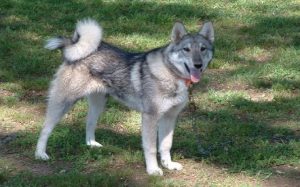 The West Siberian Laika is a medium to large sized, Spitz-type hunting dog. It is a hardy dog with a strong and muscular body. It is a lot similar to its cousin, East Siberian Laika with a slightly larger body. They are hunting dogs but also does best as a family companion. They need a house with space where they can perform their regular activities.

West Siberian Laika has a wolf-like appearance with a long muzzle, pricked ears that give it an alert expression. The eyes are oval, dark in color that is set deeply. The tail is covered with thick fur that goes up and curls on the back. They have a double coat that is dense to keep them warm in winter.

The West Siberian Laika is originated in the Ural and West Siberia. The development of this breed was done by very selective breeding of primitive hunting dogs. It is believed to be descended from Spitz-type dogs and wolves. It was used as a hunting dog to hunt small and large game but especially sable, a small furry animal. They used to bark to announce the hunters that they have found the animal on the hunt.

In 1900, when the sable was nearly extinct, the popularity of the West Siberian Husky decline. However, some began to work to preserve it and soon it gained popularity and was imported to the USA in 1992. The United Kennel Club recognized this breed in 1996.

West Siberian Laika is a suitable breed for children of all age as it is affectionate, friendly, and playful. They are gentle with them and enjoy playing with kids.

Although they are a friendly dog, their interaction with kids should always be supervised. Teach your children the way to handle dogs and not to be rough or harsh on them.

Temperament: The temperament of the West Siberian Laika is calm and friendly. They are good with all the family members and loves to be around them. They are wary of strangers and do not trust them easily. Therefore, they make an excellent watchdog.

Personality: The personality of the West Siberian Laika is gentle and affectionate with its people. Although they aloof strangers, they are very friendly and loving with their family. They love going on a long walk with them or just sit by their side. They are also protective of them and they do not let any harm come towards them.

Training West Siberian Laika is not for a novice or an inexperienced dog owner. They need a strong and trustable leader pack otherwise, they will take themselves as a leader and training can be hard after that. So, establish a firm and consistent leadership upon them.

Use positive methods of training to motivate them. Reward them with treats and lots of vocal praises. Never be harsh or forceful on them as it will only lead to their aggression.

The average life expectancy of the West Siberian Laika is between 14-15 years. During these years, they can have these following possible canine health diseases:

The West Siberian Laika comes in the following colors: