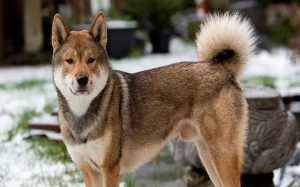 Shikoku is a medium-sized dog that is also known as Kochi-ken, Mikawa Inu, Japanese Wolfdog. This breed is similar to Shiba Inu, which is its smaller cousin and Akita, its larger cousin. They are an extremely loyal breed which is the reason people around the world find this dog fascinating.

Shikoku is an active and energetic dog that has a well-built body. They are slightly longer than tall with a compact and muscular body that is covered with a double coat. The outer coat is harsh, dense and straight, whereas, the undercoat is soft. The hair is longer in the neck, back, tail. The eyes are black, oval-shaped and the ears are triangular and erect that give an alert expression.

The Shikoku is an ancient dog breed that is originated in a remote Kochi Prefecture of Japan. They were bred to be a hunting dog and they were used to hunt big game like wild boar, deer, and other animals which were the source of master’s food.

Before World War I, due to poor economic condition, Shikoku population rapidly decreased. Luckily, in 1928, it gained its popularity again because of the efforts made by an organization to this breed.

Shikoku was originated in a remote area, due to which it was not well-known outside its region. After they were imported to other countries in the late 1960s and early 1970s, it gained some popularity. The American Kennel Club has accepted this breed in the Foundation Stock Service in 2014, which is the first step towards full recognition.

Shikoku is very friendly, loving, and protective towards children if raised together. Do not bring an adult Shikoku at home where there is a toddler.

They should be raised together, as Shikoku see themselves as a leader of the pack and small children as a lower rank. They also get a strong prey drive, which is risky for small children. Therefore, bring a puppy Shikoku and train them to socialized and get along with children from an early age. However, a well-raised Shikoku is very protective who looks after the child’s safety.

Temperament: The temperament of Shikoku is very protective, loyal and fully devoted towards its family. However, they are more devoted and loyal towards one particular person from the family, who it sees as a leader. They are very aloof of strangers and sometimes can show them aggression to protect their master.

Behavior: As a hunting dog, Shikoku has a high prey drive, so they tend to chase any small animals they see. Due to this nature of them, it is dangerous to keep small pets at the house in its presence. They have a high sense of the bad intention of people and will bark at people they don’t trust and warn their owners.

Personality: The personality of Shikoku is energetic, enthusiastic, and alert. They are very alert about the things going on in the surroundings and about stranger’s behavior. Therefore, they make an excellent watchdog and guard dog. They are very active dogs and loves to stay outdoors most of the time doing some activities.

The Shikoku is a very intelligent dog that is capable of learning a lot of skills and tricks. However, they are an independent dog that sees themselves as a pack leader. So, they need a confident dog owner who can establish leadership upon them.

They need a firm, confident, and consistent leader. Once you develop leadership upon them, they are very easy to train as they are quick and obedient learners. Also, encourage them by rewarding their every successful task with delicious treats and vocal praises.

Hip Dysplasia: The dislocation and undeveloped of the hip joints of the dog is known as hip dysplasia. It is caused mainly due to heredity and the dog will get a sharp pain on its back making it difficult to move from one place to another. Therefore, c a veterinarian if any discomfort is seen in your dog’s movements.

Elbow Dysplasia: The elbow growth disturbance in the dog is known as elbow dysplasia. This will not only make the movement of dog difficult but can also lead to the fracture of the joints. It causes the forelegs lameness in any age dogs. Exercise your dog daily by taking it out for a long slow walk, which will be very helpful for making this health problem better.

The Shikoku comes in following colors and marking:

Cost: The average cost of the Shikoku puppy is between $500-$700 USD. However, adopting can cost around $300 USD that includes the expenses of taking care of the puppy before adoption.

Height and Size: The average height of the Shikoku dog is 17-22 inches. The average weight is between 35-55 pounds.