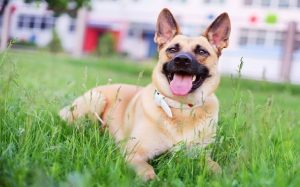 Golden Shepherd is a beautiful dog that happened when you mix a handsome German Shepherd and a beautiful Golden Retriever. Both are an intelligent, loyal, affectionate breed that thrives on in a home with active people.

The appearance of the Golden Shepherd depends on how much genes it has adopted from either of its parent breeds. It can either have erect ears or large floppy ears based on which parent genes it adopts. The combination of the German Shepherd and the Golden Retriever gives you an active hiking buddy.

Temperament: The temperament of the Golden Shepherd is active, loyal, and protective. They need a house with active and loving people that they can call their own. It is very wary of the activities going on in the are and makes an excellent guarding dog.

Behavior: Golden Shepherd needs constant love and attention from its people. If they do not see their family for a long time, they can get depressed and anxious. It forms a very strong bond with one particular person in the family while also loving others. So, it needs at least one member (even pet) to accompany them.

Personality: The personality of the Golden Shepherd is friendly and intelligent. They are very suspicious around strangers but once they see no harm from them, they will welcome them warmly. As an intelligent dog, training is not hard because they catch on commands and instruction quickly.

Golden Shepherd gets along with children very well as they are protective and loving of them. They are playful and does not get tired to play with kids for the whole day. Although Golden Shepherds are tolerant and friendly with kids, it is necessary to supervise their playtime or interaction as to avoid any kind of rough behavior from small kids.

Training Golden Shepherd is not for a first-time dog owner. It needs an experienced dog owner who knows its temperament. Establish a firm leadership on your dog at an early age so it sees you as its leader. Consistency is a must while training Golden Shepherd. Do not treat them harshly even if they make some mistakes and always train them with sweetness in your voice.

The Golden Shepherd is generally a healthy breed but as it is a mixed breed, it can inherit some canine diseases from its parent breeds.

Hip Dysplasia: It is a condition where your dog faces a sharp pain on the back causing it difficult to move from one place another. It is due to dislocation or underdeveloped hip joints. Therefore, it is necessary to check the health report of the puppy before buying it.

Obesity: It is caused due to getting fat which is a big problem as it invites other dangerous diseases. Your dog will face the health problem of joints pain, diabetes. Therefore, feeding your dog the right amount is very necessary.

The average height if the Golden Shepherd is between 20-25 inches and the average weight is between 60-80 pounds.