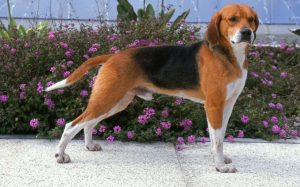 The Harrier is a breed of medium-sized dogs that were bred for the purpose of hunting hares by trailing them. They belong to the hound class and are often mistaken as oversized Beagle or smaller English Foxhound.

The sweet and affectionate Harrier dogs can be an excellent companion for runner, rider or other athletes.

There are various conflicting stories related to the origin of the Harrier breed till now. They were first bred in medieval England for the motive of hunting hares in which they are proved to be very excellent.

The Harrier Breed is believed to be the result of breeding smaller and smaller English Foxhounds. The first pack of the Harriers was established by Sir Elias de Midhope in 1260.

The Harrier breed was imported to America in the 18th century during Colonial times. It is also said that George Washington used this breed to create the American Hounds. The AKC recognized Harriers in 1885.

Yes, the Harriers are child-friendly dogs as they are very friendly and outgoing dogs. They form a close bonding with kids and will be protective of them if grown up together. Harriers are less likely to be aggressive but are stubborn sometimes. Kids are safe around the Harriers.

The Harrier is a cool-tempered dog that behaves very well with children and friendly as well as tolerant. They have a habit of barking at times which may be very annoying for some owners.

Harriers are playful and energetic dogs that love to be around people and other dogs. They have the characteristic of hunting which pushes them to chase after cats and other animals.

The Harrier has a friendly, outgoing and independent personality. They are never aggressive towards other dogs. They are very keen to please their owners and spend time with them.

Harriers act quite stubborn at times and can be very difficult to train. Though they are smart and quick learners, it is not so relatively easy task to train them.

Assertive leadership should be maintained and lots of treats should be given. Short and firm training sessions are something that they admire. Harsh tones while training them should be avoided.

Facts about the Harrier breed

Here are some facts about the Harrier breed:

Heath Issues in the Harrier breed

Harriers live an average life of 10-12 years during which they suffer from various health issues. Some of them are:

An inherited condition caused by the malformation of the hip joints is called Hip Dysplasia. It is a major concern for the Harrier breed.

It is a disorder of the endocrine system in which the thyroid gland fails to produce enough thyroid hormone.

A hereditary disease caused by the growth disturbances in the elbow joints is called Elbow Dysplasia.

The Harriers or the Hare hounds are found in five different colors which are as follows:

Here are some dog breeds that are similar in appearance to the Harrier breed: