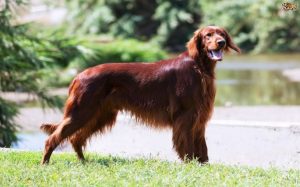 With tall and elegant appearance, the Irish Setter is known to good-sized gun dogs ranging from 25-27 inches tall with weight about 60-70 pounds. The good looking dog is featured with long legs and a long neck with hanging ears and muzzle that drops down.

The Irish Setter is popularly recognized for its beautiful rich mahogany coat and is considered to be bird dogs.

Origin And History Of Irish Setter

Not surprisingly the redhead bird dog hails from Ireland, famous for its beautiful . They were developed there in the 18th century.

The Irish Setter is a result of between the Irish Walter Spaniel, English setter and the Gorden Setter.

Generally, the Irish Setter is the youngest of the three other setters. The Irish setter was carried out by Irish hunters as they wanted a fast working dog who has a keen sense of smell with a good looking appearance.

Today the Irish Setter is a good family companion and sometimes a hunting dog too.

Is Irish Setter Safe With Kids?

Yes, The Irish Setter is safe to older children with supervision. Though they are not recommended for families with small children and toddlers as they may tend to be overwhelmed with them and may hurt them. But if properly socialized from their puppy age onwards, then they can do well with small children also.

The redhead Irish Setter breed is affectionate, playful and fun-loving who approaches everything in life with rocking and good-natured attitude. These dogs get along with all humans, especially with kids, but may tend to be overwhelmed with small children.

This mischievous breed carries a bold and adventourous personality that love to be around people. They require daily exercise to maintain their energetic and active personality. Lack of exercise can lead to destructive behavior and can become .

These handsome dogs are very cheerful, energetic and alert which makes them good guard dogs too. However being good watchdogs, they will bark to make you know of visitors and intruders.

Irish Setter is intelligent dogs which makes them easy to train. But they and consistency while training as they may tend to take the leadership of the pack which you need to take care of.

Irish Setters are very smart dogs but they sometimes tend to ignore you. It is up to you the more you can make training fun and interesting, the easier it will be to train them. Positive reinforcement and rewards will help you a lot.

Irish Setter generally healthy but like all other breeds they also prone to certain health issues. They are:

The Irish Setter matures slowly and though they are grown physically, mentally they still carry their puppy enthusiasm for several years or throughout their life. Irish setters puppies are curious and playful, willing to approach people.

Which Dogs Are Similar To Irish Setter

Dogs similar to Irish Setter are: