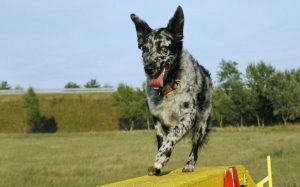 Mudi is a herding breed of dog that was originated in Hungary for the purpose of hunting and for participating in a variety of dog sports.

The Mudi dog breed which is also known as the Hungarian Mudi, helped shepherds maintain their flocks and was often called the “Driver dog”.

Very little is known about the origin of the Mudi breed. It was firstly “discovered” as a breed in 1936 by Dr. Dezso Fenyes in Hungary.

It’s believed that Mudis descended from crosses of Spitz-type dogs and herding dogs. Other herding breeds of Hungary, the Puli, and the Pumi are also believed to be related to the Mudi.

Mudis nearly became extinct after their first recognition because many dogs of the breed were killed during World War II. The breed was protected and bred from a few survivors.

The Mudi got recognized by the Federation Cynologique Internationale in 1966 and by the United Kennel Club in 2006. However, it is not fully recognized by the AKC but is classified as a herding breed and kept as a part of the AKC Foundation Stock Service.

Yes, the Mudis are very child-friendly dogs that are quite affectionate and love being in limelight while with people. They love the affection and bonding that they get from the children. They require very high and close interaction from the kids, so it is better not to have any other pets.

The Mudis are very friendly dogs that thrive on human affection. They become very reserved with strangers. This will slowly disappear the dog will readily accept and be friendly with the stranger if properly introduced.

The Mudi has a very friendly, soft, and people-oriented temperament. They like being engaged in playing with people and try to please them. They have a habit of vicious barking.

The Mudi has a lively, alert and busy personality. It loves being trained, whether for doing tricks or for competing in different dog sports. They have a habit of chasing after other small animals, digging up in the garden, etc.

The Mudi is an energetic and intelligent breed which makes it very easy to train. It is very eager to please its owner which it can do by performing the tasks desired by them. It always needs a job to do and becomes very enthusiastic regarding it. Training can be very fun and playful.

Facts about the Mudi breed

Here are some facts about the Mudi breed:

Health Issues of the Mudi breed

Living an average life of 12-14 years, the Mudi suffer from various health issues. Some of them are:

A hereditary disease seen in dogs that are caused by malformation of the hip joints is known as Hip Dysplasia.

Epilepsy is a severe health condition that causes many unprovoked seizures in the brain of the dogs.

Cataracts refer to a condition in which the eye lens becomes opaque which results in blurred vision.

Mudis are found in six different colors which are as follows:

A mother Mudi gives birth to 5-8 puppies at a time. You can expect to pay around $800-$1000 USD for a well-bred Mudi puppy considering the purity of the breed.

Some dog breeds that are similar to the Mudi are as follows: