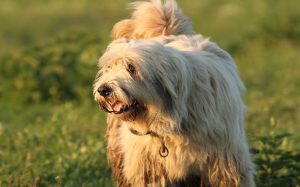 Romanian Mioritic Shepherd is a large-sized dog that has a shaggy appearance. It is also known as Ciobanesc Romanesc Mioritic. They look very much similar to Old English Sheepdog in term of looks. It is covered in thick fluffy hair from head to toe. It is a working dog that requires regular exercise and activities to keep themselves fit and interested.

Romanian Mioritic Shepherd is a large dog with a muscular body that is covered with fur from head to toe. The eyes are round and moderate in size that is brown and hazel in color. Their neck is not long but is strong and muscular. The coat is double-layered where the topcoat is straight and dense. The undercoat is soft and dense

The Romanian Mioritic Shepherd dog is a herding dog originated in the Carpathian Mountains of Romania. It is an ancient breed, even dating back to ancient times. It was bred as a herding and guard dog that used to herd and guard livestock of the illiterate rural farmers. They were also kept to protect the property of the people. This breed has many admirers in its native land and is very rare outside its region of origin.

The United Kennel Club gave Romanian Mioritic recognition in 2006 as a member of the Herding Group. However, American Kennel Club has kept it in the Foundation Stock Service group (as of March 2019) since May 2018. This group is the first step towards full recognition of the breed.

Romanian Mioritic Shepherd is very affectionate towards children. They are protective, well-mannered and gentle around them. They are not aggressive no matter how rough the children play. However, they are large in size and sometimes unknowingly, they might knock over small children. Therefore, their interaction with small children should be supervised and directed.

Temperament: The temperament of Romanian Mioritic Shepherd is calm, alert, and vigilant. They are very alert and extremely suspicious of strangers. They are known to be extremely friendly once they get close to you. It gets well with pets too but with small pets, they develop herding instinct. Therefore, the only bigger canine pet is suitable in the presence of the Romanian Mioritic Shepherd.

Behavior: Romanian Mioritic Shepherd is a very protective dog that does not allow any kind of threat towards its people on its presence. Their aggressive behavior can be seen if a same-sex dog approaches them. Therefore, they should be socialized from an early age to avoid unnecessary aggression.

Personality: The personality of Romanian Mioritic Shepherd is aggressive but gentle and friendly around its family. They are intelligent and very much devoted to their master. It is a fearless dog that can stand to face for any danger or threats coming.

Training Romanian Mioritic Shepherd is moderately easy as it is naturally an obedient intelligent and dog. They are quick to earn new commands. However, they need leadership and a leader whom they can trust and respect. They should be taught with and gentleness as harsh and force hand can make them aggressive. They respond well to positive methods of training where delicious treats and a lot of encouraging vocal praises is included.

Hip Dysplasia: It is a condition where the hip joints are either undeveloped due to heredity or dislocated from its original place. It affects the back area of the dog causing the strong pain. It becomes difficult to move from one place to another for them. Therefore, the treatment should be done on time, so that the pain does not become worse.

Bloat: Bloat is the health condition where the abdomen balloons up. It is caused due to the problem indigestion which is created because of improper eating habit. It is not a serious disease if the intake of food is controlled. However, it can get worse if not controlled in time. Consult a veterinarian about the problem and its solution.

Cost: The average cost of the Romanian Mioritic Shepherd puppy is between $800-$1000. Its price can rise up with the quality of the breeders.

Height and Size: The average height of the Romanian Mioritic Shepherd male is 27-29 inches and female is 22.5-28 inches. The average weight is 100-130lbs.