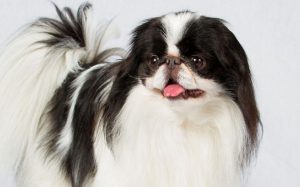 The appearance of the Japanese Chin is very small and classic with a stylish look. The head is round with a flat face and alert looking eyes that are in almond-shape. Their ears are long and V-shaped. The tail is plumed which is carried over the back.

The Japanese Chin’s exact origin is still unknown. Some that it was from China and some Korea. Some believe that they were bred by Chinese Emperors and other believes Buddhist monks. However, all that it is a product of Japanese Royal who kept them as their lapdog.

The Japanese Chin was brought in America in 1882 and the American Kennel Club recognized in 1888 as the member of Toy group.

Japanese Chin gets along with children pretty well as they are playful, friendly and gentle. They also make a great companion to play for children as they are active and entertaining. However, younger children should be properly supervised as they can be little more enthusiastic sometime and could hurt this tiny, little Japanese Chin badly.

Temperament: The temperament of Japanese Chin is very loving, funny and entertaining. They are very playful and are always running here and there. They love the company of their family members and wants to sit on their lap. Japanese Chin is obedient and also sensitive to its owner.

Behavior: Japanese Chin is very dependent upon people and does not do well if they are left all by themselves at home. This might cause them to face separation anxiety and barking tendency may increase disturbing the neighbor. Japanese Chin is not very much suitable at homes with toddlers as they might play rough which may result in snapping or biting.

Training Japanese Chin is an easy job to do as he is a people pleaser. You do not have to establish a leadership upon him as they are dependent and already see you as his master. They do not need an experienced dog owner, even a novice owner can train them as long as you use positive methods of training.

Reward you Japanese Chin with treats and praises. They will be happy and it will keep them motivated. Do not make the training session long. Keep it short and fun.

Cost: The average cost of the Japanese chin puppy is between$800-$1500 USD. However, if you consider adoption, it cost less than buying from the breeders. The cost of adoption with all the expenses is usually around $300 USD.

Height: The average height of a Japanese Chin is between 8 to 11 inches.

Weight: The average weight of a Japanese Chin is between 7 to 11 pounds.