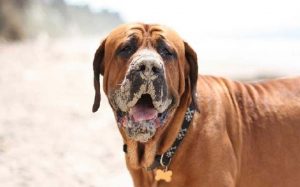 Tosa, which is also known as Tosa-Inu, Tosa-Ken or Japanese Mastiff is a large-sized dog. It is not a dog for an inexperienced or a novice dog owner as it is best suited for an experienced owner who knows its needs and behavior. If you need a calm but confident dog that you can make a good effort to train them and raise them, it is for you.

The Tosa is a large and powerful dog with a strong and muscular body. It has a large and board head with a square muzzle. Its jaws are powerful and have large teeth that are scissor bite sharp. The ears are set high on the head that hangs close to the cheeks. Their feet are large and bones are heavy, which makes them very strong.

The origin of the Tosa was on the island of Shikoku at the place called Tosa Wan in Japan. Its written record was found which proves that it has been in Japan for over a thousand years. It was bred to use for dogfighting in the ring.

Tosa is believed to be developed by crossing western breeds like German Pointer, Bull Dogs, Mastiff, and Great Danes to increase its strength, power, and size. Tosa becomes renowned for its fighting ability.

Tosa is still treated with great honor in Japan as a fighting dog. However, in the United States, it is kept as a guarding dog and family companion.

The United Kennel Club recognized Tosa in 1998 under guardian breed. The American Kennel Club has kept this breed in the Foundation Stock Service since 1997 (as of April 2019).

Tosa is an excellent companion for big children if they are raised together but kids should be taught to be gentle and friendly towards them. They are not best suited at home with small children due to their large size. They might knock over them accidentally and hurt them.

Temperament: The Tosa has a fearless and vigilant temperament. They are very watchful and alert of the activities going on in the surrounding. Therefore, they make a great watchdog and guard dog. They love their family and are very much attached to one particular person whom they see as a leader. They are fearless and cross any line to protect their people.

Behavior: Tosa is known as a fighting dog but they have a docile nature and are not as aggressive as they seem. They need to be socialized at an early age and expose them with a variety of people so that they are well-behaved around people.

Personality: Tosa has a docile personality and is a very patient dog. It is wary of strangers but is not usually aggressive. Tosa is very peaceful and devoted towards its family members even though it is considered as a dangerous dog. Therefore, it is a fearless protector of the family.

Training Tosa is not a hard job for an experienced dog owner who knows dog behavior and temperament. They need a leader who can guide them with firmness and consistency. Do not be harsh on them as it can lead to their aggressive behavior.

Train them gently and use positive reinforcement as a motivation for training. Reward them with delicious treats and vocal praises.

Tosa is usually a healthy breed with a life expectancy of 10-12 years on average. However, during these years, they might face some health situations, which are explained below:

The Tosa comes in following colors according to American Kennel Club: