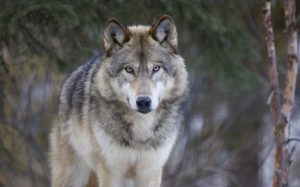 The Wolfdog is a hybrid that is bred by mating domestic dogs with the grey wolf. About 1500 years ago, the first domesticated dogs were wolves and today’s dog are the subspecies of wolves. This made it possible to cross domesticated dogs and wolves.

While breeding a hybrid, the breeder mostly selects a dog that is a less aggressive, less territorial, and friendly dog which have ideal traits.

Wolfdog has a muscular, strong, and bold appearance. They are not recommended as a pet in the house as they cannot be controlled and handled by any novice or little experienced person. They need extremely experienced people with a high level of energy.

Temperament: The temperament of the Wolfdog is independent, smart, energetic, and curious. The temperament is unpredictable of a hybrid but they are very territorial and can be aggressive with other dogs. So, only a very experienced and devoted dog owner should own this hybrid.

Behavior: Wolfdog is a very alert and energetic dog breed that is highly alert of the activities going on in the surrounding. Do not leave them off-leash as they might get aggressive if they see someone crossing their territory. It is safe to keep them in a fenced yard or on a leash while also taking them on a hike, jogging or running to meet their physical activities.

Personality: The personality of the Wolfdog is affectionate, playful and gentle with the family but suspicious and aggressive towards strangers. They are not best suited with other pets in the house, so any small or big pets is not recommended with the wolfdog.

Training Wolfdog needs lots of patience and consistency. They cannot be trained by any trainer and need a consistent and positive method of training. They are very independent that works in a pack.

If you fail to establish a leadership upon them at an early age, they will become your leader which will make it difficult to handle them. Do not repeat the same commands and instructions as they might get bored and will not focus on the training.

The Wolfdog is not recommended in a house with children as they are large-sized and a wolf-mixed hybrid. Their kind of temperament is not suitable for children. Always keep them on a leash while taking them out as there might be children around. Supervise them and train them on their aggression.

The Wolfdog is naturally a healthy dog breed that can inherit a few of the following genetic health problems:

The Wolfdog comes in the following colors:

Height: The average height of the Wolfdog is between 25-33 inches.

Weight: The average weight of the Wolfdog puppy is between 60-120 pounds.