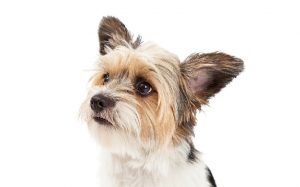 The Yorkie-ton dog is a small-sized dog that is also known by the name Yorkie de Tulear. It is a well-balanced mix of two companion dogs, the Yorkshire Terrier, and the Coton de Tulear. With this combination from both parents, it is regarded as a great family companion that does well in an apartment life too.

The Yorkie-ton got a fluffy, cute, and charming appearance from the combination of the overall looks from its parents. The feathery ears usually hang down and the eyes are bright, marble-like brown. They are even-muscled with a body that is covered with dense hair.

The origin of the Yorkie-ton is unknown but it is believed that they were bred a few decades back when the designer dogs were on trend. Its both parents have a great history as vermin and rat hunters.

Therefore, it can be said that Yorkie-ton has also established this quality from its parents. However, if we look at the history of its parents, Yorkshire Terrier and the Coton de Tulear, we can know more about the Yorkie-ton.

The Yorkshire Terrier was originated in the mid-1800s in Yorkshire, north England. Its breeding was started by people who were mostly involved in cotton and wool production. They bred this dog to control the rats and vermin that was destroying clothes in the mills. The American Kennel Club recognized the Yorkshire Terrier in 1885.

The Coton de Tulear was originated in the island of Madagascar. It was used to control rats on the ships and also as a companion for the voyages. It lived in the complete isolated island until 1960 when French tourist discovered the breed and brought it with them to Europe. The Coton de Tulear was recognized by the American Kennel Club in 2014.

The Yorkie-ton get along with children pretty well. They are friendly and loving which makes them a great companion for kids. However, they should not be left with small children without proper supervision.

Small children might do pulling and pinching, that will hurt this small dog. Therefore, teach your kids to behave around them and also the way of handling them.

Temperament: The Yorkie-ton got an even-tempered from both of its parents (Yorkshire Terrier and the Coton de Tulear). They are very friendly, affectionate, and fun which makes them a loving family pet. They enjoy a long walk or a cuddling time with its owner. It enjoys playing out but mostly wants to stay indoors with its family.

Personality: The Yorkie-ton has an active and spirited personality. They do well with other pets too if raised together with them. However, they are wary of strangers and will only welcome them if properly introduced. So, they also make a good watchdog.

The Yorkie-ton are moderately easy to train as they are independent and can be bit stubborn sometimes. They need firm and consistent training from their leader.

Use positive methods f training where you should reward them with treats as a source of motivation. Never be harsh on your dog even if they make some mistake. This will only lead to their aggression.

The average life span of the Yorkie-ton is between 12-14 years and during this time, they can inherit some genetic health problems from its parents.

The Yorkie-ton comes in a variety of colors that it get from its parents:

Height and Size: The average height of the Yorkie-ton is between 8-12 inches and the average weight is between 5-13 lbs.