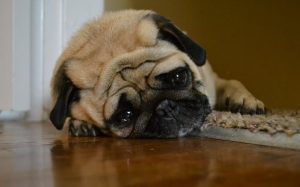 Every house owner desires a great dog that can watch after and protect their property and family. And when the dogs are serious looking and grumpy, they can be more reliable for this job.

If you want to own a grumpy dog that can watch after your family and property of strangers and threats, here are some of the dog breeds that might be suitable for you:

Pugs are probably one of the most grumpy faced dogs that you might consider taking one. These cute little furry dogs are very adorable, cute and playful as well.

Chow Chow is also a considerable breed if you are looking for a grumpy dog. This native Chinese breed is a fluffy lion type dog that is often known for its aggressive or grumpy face.

Boxer is a German breed with a short-haired body with a smooth and tight-fitting coat. The breed has a good reputation as a family dog despite its grumpy face.

The American Pit Bull Terrier is a medium-sized dog breed originated from the British Isles. Having a solidly-built body, these short-haired dogs give a quiet grumpy resemblance.

St. Bernard is a large type of working dog originated from the Western Alps of Italy and Switzerland. These huge dogs have bodies that can give shakiness to any stranger.

English Bulldog is a medium-sized breed with a muscular body. This hefty dog has a wrinkled face with a pushed-in nose that differentiates it from others.

Bullmastiff is a large type of domestic breed with a solid body and short muzzle. Originally bred for guarding purpose, these dogs are very grumpy.

Newfoundland dog is a large type of working breed originated from Canada. It has a massive body with a grumpy and prickly appearance.

Belonging to the Mastiff family, the Tibetan Mastiff is a large breed used to protect sheep from wolfs, tigers, leopards and other wild animals by the local tribes of Tibet. The grumpy appearance of this dog resembles it to a Lion.

Dogue de Bordeaux is one of the oldest French dog breeds with a very muscular and powerful body. This large breed has a distinct and massive grumpy appearance.

The French Bulldog is a type of bulldog originating from France and England. This small grumpy dog resulted as a cross between English Bulldogs in France.

The Chinese Shar-Pei is a Chinese dog breed commonly popular for its deep wrinkled skin. Gifted with a short and rough coat, these dogs do have a grumpy appearance.

Originating from Italy, the Neapolitan Mastiff is a large breed used as guarding dog. This massive breed is gifted with protective and peevish instincts. They have a very serious-looking appearance.

The Perro de Presa Canario is a rare large Molosser-type dog originated from the Canary Islands. Because of its origin, it is also known as the Canary Mastiff. It has a unique type of grumpy face that might confuse a stranger at a first glance.