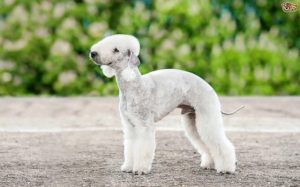 Bedlington Terriers are unique looking little dogs and often described as being lamb-like. They are mild-mannered, affectionate terriers especially renowned for being wonderful companions for older people.

Bedlingtons small dogs that are highly adaptable for being good companions and family pets. These small dogs stand up to 15-16 inches and weigh ranging from 17-23 lbs. They are featured with a long face and floppy ears.

The Bedlington is a small dog named after the town of Bedlington Northumberland, England in the early 19th century. In early times, before they got their name, they were known as Rothbury Terrier.

In about 1825, a Rothbury dog was mated to a Bedlington bitch to produce Bedlington Terrier. It is also believed that The Danie Dinmont Terrier and the Otterhound have also contributed their genes to this breed.

These Unique looking dogs were originally bred to hunt the Vermin, but since then they have been used in dog racing and other dog sports, together with that they were used in conformation shows and now as companion dogs.

Bedlington are cute little dogs which carries a fun-loving and people-oriented personality. These small dogs are easy going with children of any age group. They have a very playful side and always love to entertain and to be entertained.

They enjoy playing interactive games with kids. They are known to be very affectionate and tolerant with children, but still as we know children and dogs should never be left on their own. Adult supervision is necessary at all times.

The Bedlington is a small sized dog with a large personality, they are intelligent, alert dogs and sometimes tend to be aggressive towards small animals when outdoors.

Bedlington is calm dogs and go on better with other animals including the family cat. They have low shedding coats which can be a good choice for allergy sufferers.

If you are a first-time dog owner than Bedlington will be a good choice for you, handling them is very easy as they are quite amenable, people-oriented and eager to please people all the time.

Bedlington Terriers may look like lambs, but they are quick and clever like wolves. These little dogs are quite headstrong and can be stubborn at times which can make training more challenging.

To train a Bedlington, you need to have patience and rewarding is well worth, harsh training does not sit well with them, but yes positive reinforce can help you.

They need to be socialized properly from their young age, which means introducing with puppies, other adult dogs, and other animals as early as possible.

Some common health problems of Bedlingtons are:

The Bedlington Terriers are found in six colors, they are :

If you are looking to buy a Bedlington Terrier, you need to pay from £300 to over £500 for a well-bred pedigree

Dogs similar to Bedlington are: