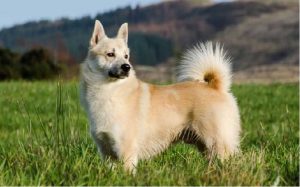 Norwegian Buhund is the former Norwegian farm dog which is cheerful, hard-working and talkative with prick ears and a wedge-shaped head. Their protective and affectionate personality makes them an ideal family pet.

Norwegian Buhund is active and needs plenty of daily exercises to avoid destructive or noisy behavior. It enjoys being the center of attention but is also considered as independent dogs at times. Norwegian Buhund is best suited for active families.

The Norwegian Buhund guarded property helped herd livestock and hunted predators such as wolves and bears. It is thought to have a long history dating back to the exposure of a Vikings. In the 10th century, six skeletons were found of various sizes which may be the forebears of today’s Norwegian Buhund.

Yes, Norwegian Buhund dogs are child-friendly because they are playful, loving and highly energetic dogs. These breeds love playing with kids and enjoy their company. Norwegian Buhund thrives in playtime and when get a chance to participate in new tricks and games. Not only friendly, but Norwegian Buhund is also protective as well as possessive towards their playmate.

Proper supervision with the children and Norwegian Buhund dogs is necessary to avoid possible injuries and damages. They are sometimes rambunctious so always watch them while playing with children, because they might get over excited and become rough players.

The behavior of Norwegian Buhund dog is loyal towards their family because its love for its people makes it a vigilant watchdog. They are energetic, intelligent and independent. Norwegian Buhund might stay on their own during the day time but at the end of the day, you will find your pet on your lap seeking attention and affection.

The temperament of Norwegian Buhund describes the dog as smart and sociable to people with an innate desire to please. They are gregarious, brave, fearless and usually adapt effortlessly to a wide variety of new situations and are not known to be suspicious around the strangers.

Intelligence and alertness of Norwegian Buhund make them an excellent watchdog with a strong personality. They are independent and tend to be just fine if they are left alone for long periods.

When it comes to dog training, Norwegian Buhund is considered possibly the most easily trained of the Spitz breeds because they are very intelligent and can learn quickly. They have a strong desire to please their owner so they will eagerly and passionately follow the given commands while training.

Positive reinforcement training techniques are preferable while training the Norwegian Buhund dog because giving treats and rewards motivate the dogs so that they will always follow the right thing and can act as a good watchdog.

Norwegian Buhund dogs are healthy but like other breeds they are prone to certain health issues which are as follows:

Norwegian Buhund dogs can give birth to 3 to 4 puppies.

The female Norwegian Buhund dogs will stand up to 41 to 45 cm and the male will stand till 43 to 47 cm tall.

The average weight of these breeds is about 14 to 18 kg.

Some of the dogs breed similar to Norwegian Buhund dogs are as follows: