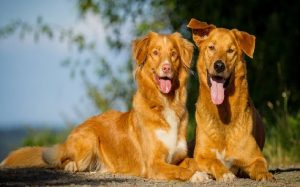 The German Shepherd is one of the most popular dog breeds in most of the countries including America. The American Kennel Club has ranked this breed in 2nd position (as of 2019). They are an intelligent and smart working dog that is very loyal and protective of its people.

German Shepherds are impeccable working dogs and if they are mixed with other breeds, their alluring traits grow and enhances. Crossbreeding is a surprising blend of two breed which appearance and traits are unpredictable. Although you cannot expect a mix of German Shepherd to be a lap dog as it itself is a very hard-working dog.

The following are the list of the mixed breeds obtained from German Shepherd and other popular AKC registered breeds.

You will fall in love with this handsome and beautiful Gerberian Shepsky once it gives you a look from its one blued eye. They are protective, courageous like their parent German Shepherd and loving, fun, hardworking like their parent Siberian Husky.

The appearance that Shollie got from its parents breed is extraordinary. Its looks give the impression of a pretty lady with a beautiful flowing mane on its neck that it got from the Collie. It is an even-tempered dog that is very loving, affectionate and active.

The Wolf Shepherd is a mix of the German Shepherd and the real Wolf! If you own this dog, you will get a fierce guard dog that is by your side protecting you from any kind of coming harm. It is a sensitive breed and also a great hunter. Therefore, small pets are not recommended in the house with him unless raised together and well-trained.

By the mix of the German Shepherd and Pitbull, you will get a loyal, loving, and a very active German Sheppit. They are a strong dog that makes an excellent companion for hiking, running, jogging and other various physical activities. While training, they need a firm and consistent leader, otherwise, it will take itself as a pack leader and training after that will become tough.

All the mixed breeds of the German Shepherd has their own quality and behavioral traits. You can choose one or all! from the above list which is most suitable for you.