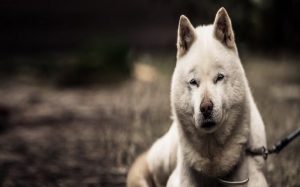 The Hokkaido are large dogs with sturdy looks and intelligent personality. These breeds are also known as Katana the Hokkaido Ken. Hokkaido Are Spitz-type dogs with pricked ears, dense coat, small eyes, and curled tail.

The Hokkaido dog breeds are one of the rarest breed in the world. In Japan itself, these dogs are not more than 12,000. Now think! how rare these breed are. If you’re planning to add a Hokkaido then here are things you must know about the beautiful breed.

The also known as Ainu is an ancient Japanese dog that is believed to be descended from the Matagi-Ken dog breed. These dog breeds are known to be the earliest dog breeds in existence living alongside the Japanese people. Hokkaido developed long before the written records were kept, so it is impossible to speak about how exactly this dog came to be in the world.

Hokkaido used as hunting dogs long before the guns were developed. It is also believed that they used to hunt brown bear with , clamping onto their neck until they go down. The ancient Japanese people also trained them to catch fish from the streams. Despite their hunting abilities, they were wonderful guard dogs for their families as well as a fantastic companion.

In 1937, the breed given their official name ‘Hokkaido-Inu’ and was elected to be the national monument. They were recognized by the UKC in 1996 and were known as Ainu however, the name was updated to Hokkaido in 2008.

Hokkaidos very protective towards children as they think that they are of their pack. Hokkaido can be a good playmate to your kids since they love being busy. They are very tolerant and will sit patiently even if they are not in a mood to cuddle with their friend.

T love being busy. They are very tolerant and will sit patiently even if they are not in a mood to cuddle with their friend.

Not only children but Hokkaido are also seen to be good around cats. So if you have one already then they can be a good match!

One of the best way to describe a Hokkaido is that they are extremely loyal and fearless. They will go down to anything to protect their loved ones if needed. Hokkaido will break down any predators without hesitation. Despite their strong personality and aggression, they are calm and gentle with their family.

Hokkaido is highly intelligent which makes them a quick learner but they might have will of their own. They might want to cross-check to ensure that you’re leading them or not. In other words, Hokkaido not recommended for novice owners or for those who can’t handle a constant leadership character.

Hokkaidos very devoted to their master. They tend to develop separation anxiety very easily when left alone. Hokkaido Inu hates being left alone and may become destructive and aggressive. Make sure you give your pet enough time to make him happy.

The Hokkaido dog as being an inherent hunter, makes easy to train. The Hokkaido will respond well to obedience training followed by treats and affection. However, their high prey drive may be an issue while training them outside.

The trainers should assume the ‘alpha’ personality with the Hokkaido while training to make sure that the dog are respecting them. The trainers should make the breed realize about what kind of behavior are acceptable and what kind are not. They can sometime become stubborn and strong willed which can be controlled with positive reinforcements and treats.

Hokkaido known to be a healthy breed but there are some common issues that are found in .

As with every large breed, Hokkaido are also prone to have hip and elbow dysplasia. It can occur when they age or even with environmental factors like injuries while running or jumping.

This is a condition mostly seen in Border Collies, but a number of dogs can develop this syndrome including Hokkaido. This disease may lead to vision impairment or total blindness.

Hokkaido are found in six colors.

So how much do you expect to pay for a Hokkaido Puppies? Well, they cost anywhere between $400-$500. Remember, since they are rare breed, the cost will depend upon the quality of the breed as well as the breeder.

The Hokkaido gives birth to 4-6 puppies at a time.

Height And Weight Of Hokkaido

The average weight of both male and female Hokkaido is 20-30 kilograms.

Lastly, Hokkaido are wonderful addition in the family which will never disappoint you since they are fabulous guard dogs will well behavior.