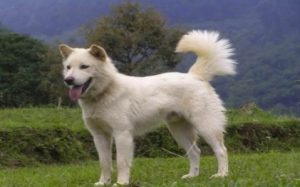 The Kintamani or the Kintamani Bali Dog is a native dog breed of the Indonesian Island of the Bali. It is the country’s only breed that has international recognition as a dog breed.

The small-to-medium-sized Kintamani is a spitz dog with erect ears and long fur. These excellent climbers are popular pets of natives of Indonesia but are very rare outside their hometown.

The origin of the Kintamani dog has various phases of stories. Some of the people believe that these dogs came along with the Javanese traders or refugees in the 14th and 15th century. Whereas, other people claim that a Chinese trader named Lee came to North Bali with a Chow Chow. The dog that he brought was later crossed with the feral dogs of Balinese natives.

Another side of belief states that the Kintamani dogs descended from crossing a dog, wolf, and fox. The Balinese dog is also said to be the result of the crossbreeding of a White Malamute with a Samoyed because its appearance closely resembles these breeds.

Genetic studies, however, reveal that these dogs evolved from the local feral breeds of Bali which also relates to other Asian dogs. This breed has become the only breed to be recognized as an international breed (as of 2019).

The Kintamani dogs do usually good with kids if socialized and trained from an early stage. But that doesn’t mean these dogs are aggressive against kids. They are friendly and playful with kids but you’ll have to be careful of their strong prey drive. However, if the dog gets the appropriate training and socializing from a young age, they can prove to be a very excellent friend for your kids.

The Kintamani dogs have a friendly and lively temperament towards people but are somehow territorial towards other dogs. They easily integrate into life as a household dog. These dogs are known to be playful around its people and pack. Moreover, they have a habit of chasing cats and other small animals.

Talking about the personality, the Kintamani dogs are curious, alert and active dogs. As they have an independent character, they can be destructive if not socialized on time. These vigilant dogs are very territorial and become very aggressive to protect their territory and pack.

They are not excessive barkers but can bark to alert their owner if something or someone suspicious enters its owner’s house.

Training a Kintamani dog is not so difficult as it is an intelligent breed. What you should consider while training is that make sure that you have control over their independent mind. For this, you’ll have to start training the dog as early as possible and enroll them with positive reinforcement methods.

Here are some of the facts about the Kintamani dog breed:

The Kintamani is a very healthy breed with no major health issues. As for minor concerns, skin problems are something to look after your dog. So, regular check-ups and tests should be done to ensure that your dog is growing healthy.

The Kintamani dog are found in four different colors which are:

How often can a Kintamani be pregnant?

A female Kintamani dog can be pregnant only once in a year. As more frequent breeding is not healthy for your dog, you should breed your Kintamani annually.

After a pregnancy phase lasting about 60-64 days, a mother Kintamani dog gives birth to 1-6 puppies at a time. The price of a Kintamani puppy varies from breeders to breeders. But normally, a Kintamani puppy is sold at an amount starting from $200 USD.

Dog Breeds Similar to the Kintamani

Here are some of the dog breeds that are similar in appearance to the Kintamani dog breed: