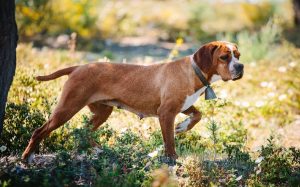 Portuguese Pointer is a medium-sized, active hunting breed which is very lively and needs vigorous exercise to remain healthy and sit. They are not an apartment dog as they need a big area to fulfill there exercise needs.

If you are keeping it in an apartment, take him for a walk or exercise regularly. Therefore, they are best suited for the countryside with big is for them to play and exercise.

Portuguese Pointer distinct feature is that they have a square-shaped head like Boxer. Their body is well built and muscular with droopy ears, oval eyes that is either dark brown or light brown. They have a black nose and sometimes the one with brown coat could have a brown nose. The coat in the body is light coarse whereas, the coat on the face and ears feel soft like velvet.

Portuguese Pointer is originated in the Iberian Peninsula and its existence can be traced back to the 12th century. The Royal Kennel originally bred this breed to use it as falconry and it is still used in Portugal by falconers.

Portuguese Pointer was not widely popular until it was described by author Joao I in a book of hunting in the 12th century. They were used as a gun dog that used to asset bird hunters towards the location. As of today, they are famous as a family companion.

The American Kennel Club has kept Portuguese Pointer in the Foundation Stock Service Group (as of March 2019). It is the first step towards full recognition. The United Kennel Club fully recognized this breeds in 1996 and it is allowed to participate in all events hosted by UKC.

Portuguese Pointer is best suited in a house with children of all ages as they are very friendly, affectionate and protective, especially with children. Kids can play hours with them by playing balls and fetching them.

They might sometimes get a hunting instinct with outside children and might tend to chase them, they should be supervised and taken out on a leash. However, the make an excellent companion for children at home.

Temperament: The temperament of Portuguese Pointer is active so, they require a lot of exercises. They are very affectionate and can get along with strangers and other canine pet well. At first, they might be shy and wary of strangers but after a proper introduction and knowing them closely, they can be kind towards them.

Behavior: Portuguese Pointer is very devoted and close with its family members, especially with one particular person. Therefore, if they are left alone without the company of anyone, they might be anxious and show their destructive behavior. Sometimes they can even have separation anxiety and nervousness.

Portuguese Pointer is not a dominant dog so it is easy to train. However, they are an independent dog that does not want anyone telling them what to do and what not to do. They can be stubborn sometimes, therefore a firm leadership with confident and consistent training is necessary.

They respond well to positive methods of training that includes vocal praises, and delicious treats. Encourage them every time they finish their task by giving a gentle pat on the back and encouraging words like “ dog”.

The Portuguese Pointer is generally a healthy breed with some genetic health problems. The average life span of this breed is 14 years. Some of the health problem that it might face during its life are as follows:

Hip Dysplasia: The undeveloped or dislocation of the hip bones or joints is called hip dysplasia. It causes sharp pain on the hip part of the dog which makes it hard to move them from one place to another. Therefore, if any discomfort is seen on your dog, visit a local vet for a consult.

Ears infection: Ear infection is mainly caused due to lack of cleanliness. Many foreign particles can get into your Portuguese Pointer while he is playing or hunting, which can get worse if not clean often. Therefore, it is necessary to keep your dog’s ears clean as to avoid any ears infections.

The Portuguese Pointer comes in following colors and markings:

Cost: The average cost of the Portuguese Pointer puppy is between $800-$1000 USD. However, if you consider adopting rather than buying from a breeder, it will cost a lot less. The adoption expenses come around $300, which includes the expenses of taking care of the puppy.

Size: The average height of the Portuguese Pointer is between 20.5-22 inches. The average weight is 39-59 pounds.