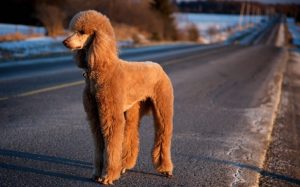 Poodles are one of the most appreciated dog breeds around the world. They are available in various colors such as Black, Apricot, White, Cream, and more which are very common in them. Besides these, red-colored poodles are considered very rare and unique because of their amazing color.

There has been a heated debate regarding the Red Poodle. Is this color a more common variety of poodles? No, not at all. It is considered a very rare color in the Poodles.

The Red poodle that we see today took quite a while to be created. A person named Ilse of the Shangri-La Kennel was first to come up with the idea of developing a red colored poodle. So, for the experiment of this, a small miniature apricot female Poodle was mated with a large standard sized red Poodle at Palomares.

The very first puppies produced by the breeding were four red Poodle puppies. The color was simply amazing due to the pairing of two different sized Poodles. Thereby, the puppies were kept into a category between the Miniature and the Standard, also called Moyan or Klein, which is very popular and well recognized in Europe.

The biggest puppy from each litter was later bred which helped to increase the size of the dog slowly but surely. Red Standard Poodles were able to be bred after a few years of keeping and breeding red Poodle puppies.

Yes, the Red Poodles are extremely child-friendly dogs that enjoy and thrive on the affection of small kids. They are obedient and gentle with children of all ages.

Though these dogs are good with kids, they don’t often do well in homes with lots of children where the dogs will have to deal with yelling and shouting. However, families with one or two kids will find this breed suitable.

Behavior: The Red Poodle can behave differently according to their moods. Some of the most common behaviors include nipping, barking and jumping on people. These dogs don’t do well when they are left alone in the home and also might cause destruction and develop separation anxiety.

Temperament: The Red Poodle have temperaments such as intelligent, loyal and alert. In addition, these dogs are also active, instinctual and easily trainable. They are very smart dogs with the ability to learn commands and tricks very quickly.

Personality: Talking about the personality, the Red Poodle is a loyal, energetic and reserved dog that can sometimes prove to be stubborn. Also, the empathetic and natural ability of the dog to engage with people makes them great dogs for visitors.

The trainability of the Red Poodle is very high as it is an extremely intelligent breed. It is a graceful and agile as well as a very smart dog that enjoys and excels in a variety of canine sports such as obedience, agility, and tracking.

The Red Poodles are very people oriented and if the training sessions are fun and positive, they never fail to please you. You’ll just have to be sure that you maintain consistency with what you train.

Facts about the Red poodle

Here are some of the facts about the Red Poodle:

Living an average life of 12-15 years, the Red Poodle suffers from some diseases which are as follows:

Hip Dysplasia is a hereditary condition in which the hip joints of the dog does not fit in the socket due to malformation.

Epilepsy is a disorder in the central nervous system in which the brain activity becomes abnormal causing seizures.

It is a condition when the kneecap gets dislocated from its normal position in the thigh bone.

Hypoglycemia is a disease caused by a very low level of blood sugar or glucose, which is the main source of energy for the body.

The Red Poodle itself has red in its name which means that the breed has only one color. Variation such as brightness and lightness in the color can occur as per the dogs.

Since Red poodle is a very rare and amazing breed of Poodle, the normal cost of a puppy is higher than the other poodles. The price of a red poodle ranges from $3000 and above for both and female.

Here are dog breeds that are similar to Red Poodle: